In 1964, a young Douglas R. Dimes walked into the shop of Windsor chairmaker, Leroy Partridge. Immediately Mr. Dimes knew that was something he had to do. With no money, three young children and no experience, he set out to become a furniture maker. While holding a full-time job, he worked every spare moment to make Windsor chairs. Under poor conditions and with antiquated equipment, he slowly built a reputation as a fine chairmaker and a tough businessman. In 1968, Mr. Dimes hired a 15-year-old kid, Thomas Lavigne, from the neighborhood to help him in the shop. Tom became a fine craftsman in his own right and is still with the company today as Vice President of Operations. 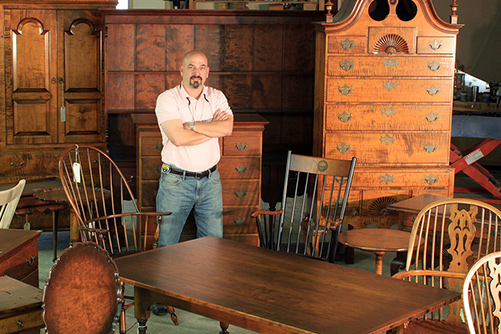 At the time of America’s bicentennial in 1976, the country found a new fascination with all things early American. D.R. Dimes was well positioned as virtually the only custom furniture company making museum-quality Windsor chairs. Business was good, so Mr. Dimes quit his job and began to make chairs full time. In 1978, D.R. Dimes built his own shop in Northwood, New Hampshire. The company was growing fast and the building was often expanded.

Throughout the late 1970’s and 1980’s, D.R. Dimes was commissioned by museums such as Independence Hall, The Smithsonian, and Olde Sturbridge Village. He used every opportunity to learn more about the early American furniture makers. In 1980, he began to make some furniture, small tables, and cupboards at first. He applied the same intensity to learn and improve his furniture as had with chairs and soon, the line began to sell. The shop expanded more but never so fast that quality was sacrificed. During the early 1980’s many key craftsmen joined the company. Those people, Roger Letourneau, David Penfield, and Elizabeth Skoog, are still with the company and are integral parts of our past and future success. In 1988, after several years of working part-time, Mr. Dimes’ son, Douglas P. Dimes, joined the company full time to become Marketing Director.

The 1990’s were eventful for the company. In late 1990, Mr. Dimes signed a contract to become a licensed manufacturer for the Colonial Williamsburg Foundation. In July of 1991, the factory burned in a five-alarm blaze. In May of 1992, a new and modern facility was completed. The balance of the decade saw two additions to the new facility and a tremendous expansion of the furniture collection including the Bonnet-top Secretary, Bonnet-top Highboy, and Roxbury Tall Case Clock.

In the spring of 2005, the decision was made to expand the company services to include custom kitchens and custom built-in cabinetry. In the fall of 2005, Douglas Partridge Dimes, after 25 years with the company, was named Chief Designer & President.

The rich history of our custom cabinetry company is second-to-none. Contact our team today to work with an experienced team of woodworkers who share your passions for American furniture and cabinetry design.

We have hundreds of years of fine woodworking experience in the shop.

Whether a highly developed architectural library or a simple Shaker style vanity, good design is critical.

We think of design as a foundation and without it a quality structure cannot be achieved.